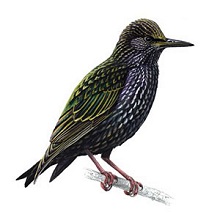 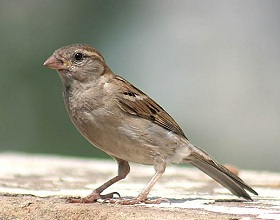 Description: Starling: (Left Photo) The starling is found throughout the United Kingdom and in most other parts of the world. The Starling has the reputation for being one of the noisiest and most gregarious garden birds. The plumage is mainly blackish with buff edged wing feathers and reddish-brown legs. The sexes are alike though the male has fewer speckles on the rump and wings. The bill is dark grey-brown during the winter. Starlings are great at mimicry, with examples including machines, such as telephones and car alarms, and other birds such as curlews and pied wagtails. Consequently, it is difficult to know what their song is other than a medley of squeaks, clicks and whistles.

Description: Sparrow: (Right Photo) The sparrow is found throughout the United Kingdom. The sparrow is between 14 and 15cm in length, with a wing span of 21 to 25cm. The male sparrow has a chestnut brown back with black streaks, while the underparts, rump and crown are grey. The nape is chestnut brown, the cheeks are dull white, and they have a black eye stripe and bib. The beak is yellow-brown in winter, but black in the summer, and the legs are pale brown. The female is paler and lacks the grey crown, white cheeks, black bib and eye stripe and chestnut brown nape, but has a straw coloured stripe behind the eye.

Biology: Starling: The male builds the nest from grass in a hole in a wall, tree or building, but the female lines it with feathers, wool and moss. The male may decorate the nest with leaves and petals in order to deter parasites and improve his chances of attracting a mate. The eggs are pale light blue, smooth and glossy, and about 30mm in length. Breeding starts in mid-April. There are 1 to 2 clutches each containing 4 to 9 eggs. Incubation lasts between 12 to 15 days and the hatched chicks are fledged after about 20 days.

Biology: Sparrow: Sparrows live in colonies in an urban environment. They nest in holes or crevices in buildings or among creepers growing on buildings. The nest is an untidy domed or cup-shaped structure of rubbish: paper, straw and string. The eggs are white with grey or blackish speckles, smooth and glossy. They are about 23mm in length, and weigh about 3 grams. Breeding starts in May. There are normally 3 clutches of eggs each containing 3 to 5 eggs. Incubation lasts between 11 to 14 days and the hatched chicks are fledged after 11 to 16 days.

Control: A thorough survey by professional personnel is highly recommended. Birds and their droppings make buildings look unattractive and poorly maintained. (As shown below) The droppings can create a slip hazard, and its acidic characteristic eat away at stonework. Bird prevention is possible by many approved solutions, Netting, Gelling, Spring Wires, Spike System and Cleaning & Proofing.

A COSHH Assessment on Bird Faeces, Debris and Nesting Materials is carried out for all work involving birds. Click Here for Details. 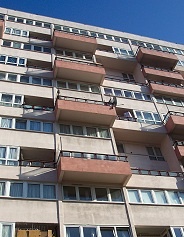 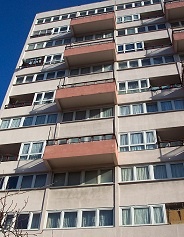