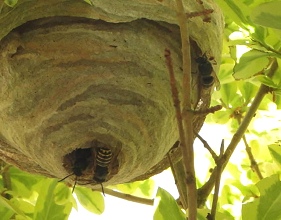 Description: French Wasps also know as Median Wasps arrived in England during the 1908s. Queens may grow to a length of 18-22mm. Workers and Drones grow to 15-19mm in length. The Median Wasp is black with yellow stripes, sometimes the stripes on the thorax are reddish in colour. There are variations in colour from nest to nest, and some may appear completely black.

Biology: The queens usually starts building the nest by the end of April. Nest are constructed in the open air attached to a branch of a tree or in shrubs. Houses are occassionally used where it will be attached to gutters etc. The wasp nest is football shaped and with time becomes an oval shape. An important characteristic of the nests isthat they have so called air chambres that attach to the outside of the nest and ensure air circulation. In the early stages of a nest a tunnel can been seen, with time this disappears. The nest has a maximum of six combs and anywhere between 900 and 1700 inhabitants, including eggs and larvae. The maximum number of workers is about 500, these start to appear at the end of May/ early June. The Median/French Wasp is attracted to sweet food. French Wasps are generally a peaceful species, they prefer to fly away rather than attack you. Stings are quite common though due to gardeners pruning shrubs and not realising the wasp nest is present.

Control: It is recommended that professional personnel are used in the treatment of wasps. An insecticide will be used to cover the entrance to the nest. Returning wasps will carry the insecticide into the heart of the nest and within a few hours all wasps should be dead. Wasp nests should be treated early or late in the day when the activity is at a minimum.

Never worry about pest or wasp control ever again – call on us for a quick and easy french wasp nest removal service now.

At ABC Pest Control, we are committed to making you feel safe and comfortable in your home. So call on us for wasp nest removal or pest control and we will restore the harmony in your house and garden once and for all. All our wasp nest treatments and removal services are guaranteed.

All french wasp nest removal services are executed with health and safety, and complete customer care in mind. Call for more information now.