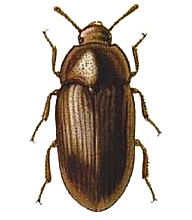 Description:Mealworm beetles are widespread thoughout the United Kingdom. Adults are 5.8 to 6.3mm long, dark brown to black, with a distinctively dimpled thorax. The adults and larvae are often found in floor litter where they feed on poultry feed, dried bird droppings, and bird carcasses. Being a general scavenger, they can also be an occasional pest of stored products. In high numbers, in addition to being a vector for disease, the beetles can cause considerable structural damage as the larvae will often tunnel into polystyrene insulation materials or even wooden beams and supports in order to pupate.

Biology: After mating, the female has the ability to lay over 2,000 eggs, but the average is 200 to 400. Eggs are laid in batches and hatch in 4 to 5 days under typical room temperatures. The larval period can be as short as 8 weeks and following a 5 to 10 day pupal stage, the adult emerges. The average time from egg to adult takes about 80 days and the adults can live from three to twelve months.

Control: Effective litter management can slow the development of these beetles and reduce the chances of having excessive build-up of numbers. The poultry houses can be treated with residual insecticides (ideally after cleaning) but often not in the presence of birds (check label instructions). In non-poultry situations, infested goods and debris should be removed, followed by spraying with a broad spectrum residual insecticide.