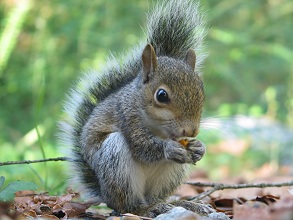 Description: The grey squirrel is a familiar sight across much of the United Kingdom. The grey squirrel is not native to the UK, having been first introduced from America in the late nineteenth century. It is largely blamed for the decline in populations of our native red squirrel (Sciurus vulgaris) although in truth, this also has as much to do with the disappearance of the red squirrels natural woodland habitat, as it does with competition. The introduced species is larger than the red squirrel, with mainly greyish/brown fur, and a white belly.

Biology: Grey squirrels are active during the day and are omnivorous, feeding on seeds, nuts, insects, bird eggs and increasingly adapting to match many of the foods that we may discard. Squirrels are well-known for their habit of hoarding food in autumn to see them through the harsh winter months. Breeding takes place from December to February, and again in March to May. The gestation period is typically between 6 to 7 weeks and on average two litters are produced each year, consisting of 1 to 8 young. The average lifespan is 8 to 9 years.

Control: This species is now a serious pest in United Kingdom. It is a threat to forestry land where its habit of removing tree bark is extremely damaging. In towns and cities, it can be a considerable pest by casing damage to structures and electrics in lofts etc. The most common and successful method of control is trapping, with either live trapping or spring trapping. Always use traps in accordance with statutory guidelines and trapped animals must be disposed of humanely.