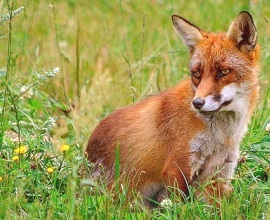 Description: The Red Fox is native to the United Kingdom. Foxes can be found in urban areas as well as the countryside. Urbanised foxes take adavantage of the food and shelter provided in larger gardens etc. The number of foxes in cities such as London are often higher than in the countryside. They are now fully accustomed to living near people. They are predominantly noctural, however an urban fox can often been seen during the day.

Biology: Foxes are a Red/Brown with a lighter underside. They stand about 35-45cm tall with a tail between 30 and 50 cm long. An adult fox weighs about 8kg. They have 1 litter of 4 to 7 per year and reach maturity in a year. They live between 7 and 14 years.

Control: Foxes are becoming more common in urbanised areas and cause problems in people's gardens, and threaten the lives of pets. To control foxes they are caught using live catch traps. These are humane traps and do not hurt the fox. Fox Traps must be checked regulary.

Humane Fox Traps
We offer a professional humane fox trapping and removal service for foxes that are causing problems. Also we offer a fox trap hire service, all fox traps must be checked on a regular basis. Our fox trapping services cover all London boroughs and Essex. Call ABC Pest Control London today on 0800 378825.