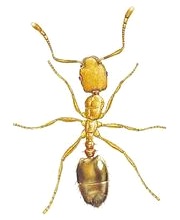 Description: The pharaoh's ant is a small ant of tropical origin. The workers are only 2mm long, the queen 5mm long and both are yellow in colour. The ant has a characteristic double segmented waist and a darkened tip to the abdomen.

Biology: In temperate climates it is an indoor species, associated particularly with large facilities such as hospitals, prisons and blocks of flats. Unlike some other ant species, the queen may be replaced by other queens. This is an important feature to bear in mind during control, as new queens can be produced when needed resulting in colonies which are able to split. There can be many queens within a single colony. Pharaoh's ants can reproduce in two ways, firstly when a colony is big enough it produces males that fly from the nest and find another colony where they will mate. Secondly by budding, where a scout finds a new suitable nest site and some workers and a queen migrate to it to form a new nest.

Control: A thorough survey by professional personnel is highly recommended. Pharaoh's ants are most often found in areas near a source of moisture such as a kitchen or bathroom. The use of conventional residual treatments is generally not effective as they may cause the nest to fragment. Baiting may be effective if the active ingredient is slow acting. Good results have been shown by using juvenile hormone based treatments. The treatment consists of applying bait to areas frequented by the ants, which works by stopping the ants breeding and so they naturally die off. You will usually notice a reduction in the number of ants within 28 days, but it may take longer to kill off all the ants. Although modern treatments are very effective, there are rare occasions when it does not completely work.