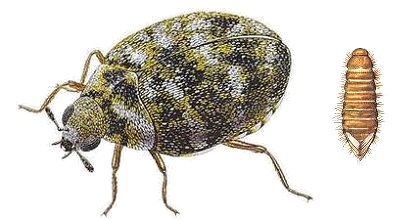 Description: Adult carpet beetles are 1.5 to 4 mm long and variable black or brown with mottled yellow or white markings. A pest primarily in the home, food and museum sectors (the latter causing a significant threat to collections). Carpet Beetles can be found throughout the UK including London.

Biology: Mating occurs immediately after emergence. The female produces up to 100 eggs over a period of two weeks. The eggs hatch between 10 to 35 days depending on temperature. Larval forms (known as the "Woolly Bear") can reach 4 to 5 mm in size before pupation and can cause considerable damage to products such as wool, fur, leather, silk and animal skins, and occasionally cereal based food products. Adult carpet beetles usually live outdoors on pollen and nectar, and thrive in situations where they remain undisturbed, such as under carpets, bird and rodent nests and animal remains.

Control: Before treatment can begin, the first step is to trace the source of infestation such as old birds' nests in lofts or rodent nests under floorboards. Where appropriate, treat and remove old nests in lofts and under floorboards with an insecticide dust. Treat the underside of carpets, around skirting boards, window frames, pipes from roof spaces and disused fireplaces, and other areas likely to be contacted by invading adult beetles with a residual insecticide. Perseverance and patience must be exercised in dealing with this pest as immediate results will seldom be achieved.