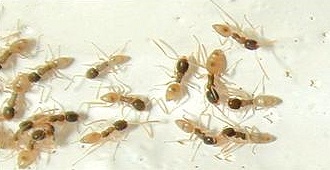 Description: The ghost ant is sometimes known as the black-headed ant. This ant is very small at about 1.5mm in length, with a dark head and thorax. The pale coloured, almost translucent abdomen and legs, in addition to its tiny size, gives the ghost ant its name.

Biology: Although having only arrived in the UK in recent years, and still relatively rare, the ghost ant is spreading quickly, particularly in large housing developments. The ghost ant colony can be moderate to large in size, containing thousands of workers and multiple queens. The colony is usually divided into sub-colonies, this is because the areas where ghost ants prefer to build nests are usually too small to house their huge numbers. Different ghost ant colonies do not attack one another and will even integrate with their neighbouring ghost ants. Ghost ants have a preference for sweet foodstuffs. Outdoors they feed on the honeydew from aphids and mealy bugs, indoors they will seek out sugar, sweets, syrup, honey and jam. The biology is similar to the pharoah ant.

Control: Spraying with a residual insecticide where trails are seen is more likely to achieve results than with pharaoh ants, however, because of their small size and ability to form new nests, re-infestations often occur in other parts of the building. Combination treatments with gels and slow acting liquid baits are usually advised.